More work on the Savaged Universe.  Still working on the political and governmental structure with the help of Freemind, but one of things I have figured out is most of the military structure.

The Imperial Navy is supported by the ARM Marine Corps.  Ships of the Imperial Naval line are patrolled and guarded by ARM Marines.  Most ships transport at least 3 full platoons for ship to ship combat and foothold actions(Planet side invasions) as well.

Lower ranked Naval Officers are often placed in charge of ARM Marine patrol and platoons, and so most are trained in and use ARM weapons.  Here are a couple quick sketches. 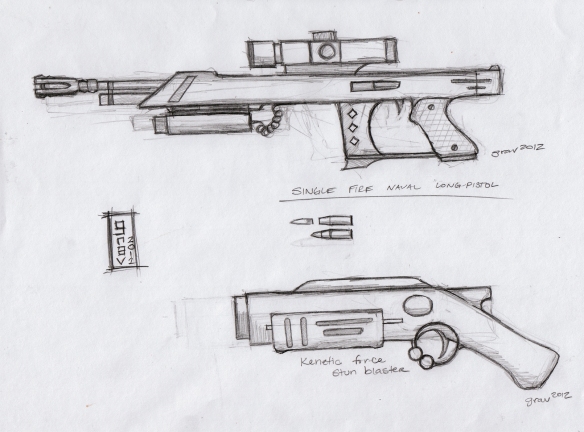 Both weapons are specifically designed to be used by unmodified Naval and Marine personnel, during ship boarding and ship defending actions.  The single fire Long Pistol fires a small full jacketed round, designed to cause massive damage to organic material only.  Capable of being used either full auto or semi-auto, weapons training normally stresses that officers and troopers fire only one round at a time.  The small size of the round was designed to not puncture the bulkheads and internal system of a spacecraft.

The Kinetic Force Stun Blaster was designed to be slung around in a few quick motions before discharging energy in a blast that was designed to stun or knock an opponent out.