MARSHMALLOW PORCUPINES THAT FART GLITTERY RAINBOWS AND BREATHE SULFURIC FIRE OUT OF THEIR NOSTRILS!

This is what I get for asking my friends for help and inspiration.  And what do my friends get?!? 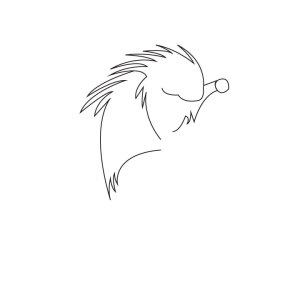 Step one was to figure out how to even make a Porcupine… So a quick trip to Google, and then a leap into Illustrator, and this outline is born!  Now he isn’t a marsh-mellow, but he is a bit “fluffy”.

I also decided that if he was going to be “Farting” rainbows and shooting flames from his nose, he needed to be ROCKIN’ OUT!  Hairband Style.

Next step was to add an electric guitar.  Of course this work was all done WHILE listening to 80s metal.  Inspiration comes from all around after all. 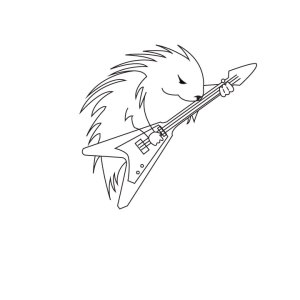 I also added a few more spines, as well as the second arm, and detailing on the hands.  I gave the Porcupine a bit of a “war” face, after all he is playing “the devil’s music”.

Can you see the rainbows?  The FLAMES!?!?  I mean this little guy has gone through the Ozzy and Zombie school OF FACE MELTING!  In a fantastic 80s way.

I need an art show,  it would be like Bob Ross mixed with Emeral.  You know.. behind this “happy tree” is where I hid the body, but don’t worry because HERE IS A BEAVER DUAL-WEILDING CHAINSAWS!!!!!!!  Or a History Channel special: “Beaver: The Real Ax-men.”

BAM!  Now the Little bastard has a clip!  I mean a Rainbow.  So you guys can kinda follow along with what I do behind the scenes, this is the last step where this guy is in Illustrator.

I have some lines to clean up in photoshop, as well as color to add.  This does show that you can get a lot done working just in Illustrator .  Organic shapes are pretty easy to come up with after you get over the fear of how it might look.

I cover more on how to use Illustrator in my tutorial series.  CHECK IT OUT!  (Nothing says metal more than caps everyone ONCE in awhile just to make sure the reader is paying attention.)

So a lot is going on here, I have yet to decide on what I am gonna do at the end of this logo.  Often I like doing “painted” logos.  This works pretty well with the digital state of most media these days.  It looks good, but it does take more time.  However after just a few minutes of tweaking and messing around I went back to the base Logo and redid the color.

Basically I felt I was moving past the original intent of the logo, as well as starting to get a bit too deep into a fun/quick logo.  I have more logo work, that I will be featuring in the future, that does follow the “Painting” method.

And here he is in all his GLORY!! Praise the HARDCORE PORCUPINE!

Error: Twitter did not respond. Please wait a few minutes and refresh this page.