I have a hard time buying, renting, or copying a Halloween costume, it might be the artist in me or the costume designer, writer, and prop maker, but somehow every year I make something.  Now that isn’t to say I don’t base it off things, I do, or that I don’t have some theme, I normally have that too.

So this year, a few months ago,( see how current I am in my own timeline these days?) I decided to do a space pirate/bounty hunter/something.  1 part Firefly, 1 part warhammer, 1 part “crazy”, blend and you get what I did.  Anyway in order to pull it off I decided to finally get to one of my long standing prop projects.

Mainly trying to make one of these..

Now A long time ago I found myself in a GameStop and they where having one of those “everything must go” sorts of sales on controllers, and devices.  I didn’t even hesitate, I nabbed three old school Nintendo zappers, the type used in Duck Hunt, unscrewed them and removed the cords.  This was about 9 years ago, before I really had a desire to collect old gaming equipment, and honestly really before it became the in things to do, besides I am a designer, so re purposing is in my blood!

So these four guns have been laying in my “to-do” box for a few years, and it just so happened that this year I decided it was time to build something!  A quick raid of the garage, a trip to get some 5mm thick pvc and so paint and I hand these mocked up and ready for Halloween.

Not the best work I have done, but great first mock-ups.  Here is another view to give you and idea of size.

I am not 100% happy with these, and looks like I will be tearing them apart and working on the 2nd mock ups soon.  Biggest issue?  I jacked my paintball barrels and I need them Back! 🙂

Another piece inspired by the Warhammer 40k world.   This is a bit closer to what I was going for.

I like doing concept work on these darker subjects because of the detail that needs to go into them, and the hinted back-story that can be conveyed through gestures and expressions.

This is another piece I hope to paint!

So I have yet to mention it here, but myself and some friends have begun to work on an unnamed action short movie, based on my existing Fictional Blog.  This has truly been a difficult learning experience, as I have had to take my existing manuscripts and convert them into screenplays…

BUT WAIT!  It gets better… Then through-out a series of meetings we have looked at the script, refined it to make it work a bit better, and then we booked a location.  It’s pretty awesome and the closer we get to release I will have more information on the entire project, but I had to re-write the script to fit the location!

All in all I have grown a lot as a writer with this project and we have yet to truly start!

I have also been trying to keep up with my sketch a day challenge, even when I don’t make a post I still sketch, and this is some of this weekends work, enjoy: 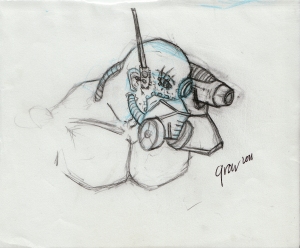 Inspired by the Warhammer 40k world, this is just some concept of a future painting I want to do.  Still very much playing with what this guy will even look like.

When I start to conceptualize this stuff in my head I do lots of sketches before I get anywhere near what I am happy with.

Sooner or later I will finish Lain and start this one! (maybe)  🙂

This guy is a sketch to fit into my Savaged world.  He/It is a member of the Galactic

A member of the Galactic Hunter's Guild.

Hunter’s Guild, a federation of Bounty Hunters that act a bit like US Marshals in the less than civilized “fringes” of the many Galactic Empires and Civilizations.  Many times a Hunter is the closest thing to an Empire’s official representative in a Star Systems.

They live by their own creed, and exist very much above the law.

So last year for PAX, I built a new computer.  It was a nice piece of work, very powerful and pretty amazing gaming rig.  Based on how powerful it was I decided to name it the “Hellforge”  after one of the Word Bearers Chaos Battleships.

In order to keep up with the theme I decided I would use my warhammer skills to modify a keyboard.

Here is the sketch of what I wanted to do.  A few months of working at Starbucks I gathered enough empty/used gift cards to have a nice supply of plastic card.  Combined with a quick hunt through my bits box I found enough pieces to build what I wanted, or to get damn close.

My original sketch, as seen here, called for a few LEDs and some added buttons, but I scrapped this idea based on time concerns.  This is a prototype, I may do a new one soon.

Here are all my supplies, including a bunch

of water!  As you can see here I also have my Dark Hersey RPG book, opened so I can figure out what I am gonna do as I move forward.

The keyboard I used as the base was cheap, one of the nine dollar deals.

The resin skull is to add more details to the keyboard, giving it a link the Mechanium. 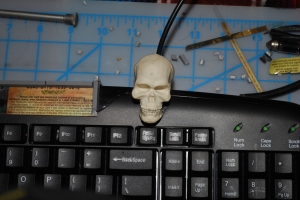 Skull close-up.  Also shows some of the other details around the edge of the keyboard where I tried to make it squared off.

I had to cut away most of the back of the skull to get it to fit, as well as hollow it out so I could pull the cord through. 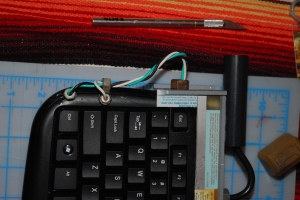 Here is the left corner in detail.  I added some power cords to give it a bit more of a flair.

I outfitted the skull with more bits and wires to make it look more like a servo-skull.  I also added green-stuff to smooth out some of the joints and make it look like added weld lines.

All ready to get it’s first layer of dried blood red paint.  I decided to use this colour because it matches the base coat I used on all my Word Bearers.

I used my air brush and custom mixed citadel paints to lay down a few layers, then I pulled off the mask and cleaned up whatever I needed to.

Lastly I let the keyboard dry and set before I decided on what colours to use on the rest of the build. 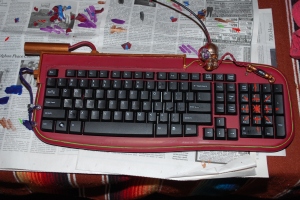 Finally done!  Painted the skull copper, then used a dry brush to distress the edges and the WSAD keys.  The glass tube located above the LEDs is positioned to glow green, and the green edging is done to enhance the effect of the keyboard and tie it to the Warhammer world.   I also added the Mark of Chaos Undivided to tie my keyboard to the Chaos Marines.

Since I finished I have used the keyboard for almost a year, I plan to touch it up once more and either retire it or modify it more for PAX this year!

Error: Twitter did not respond. Please wait a few minutes and refresh this page.